The enthusiastic young Norwegian had asked too much of the clutch as he held seventh in the first moto in the claustrophobic climatic conditions and unrelenting bottomless sand of the most demanding track in the world, but an interval pep-talk with experienced F&H team coach Marc de Reuver set the scene perfectly for the magnificent race two showing. He quickly moved into the top-six after leaving turn one eighth and paced himself perfectly through the exhausting thirty-five minute race. By mid-moto he was involved in an intense three-way tussle for fourth, a position he made his own with four laps remaining to set off after the front-three. Lapping several seconds per lap faster than the riders ahead of him he stormed into third halfway round the penultimate lap and almost caught second at the chequered flag. He remains fourth in the series points standings with four GPs remaining.

Kevin Horgmo: “It was nice to finish the day so strong. I lost quite a lot of time in the early laps of race one as I searched for my rhythm; once I got going I was catching up again but unfortunately I had to pull out so that made me even more determined to bounce back in race two. I took it quite easy through the first few laps but once I found the rhythm I felt strong and fresh. I could ride my lines, kept it going to the end and got up to third. Now I hope to finish the season strong; the next GP in Sweden is almost a home GP for me, just two-and-a-half hours from where my parents live, and I’m sure there will be a lot of Norwegian fans there to support me.“ 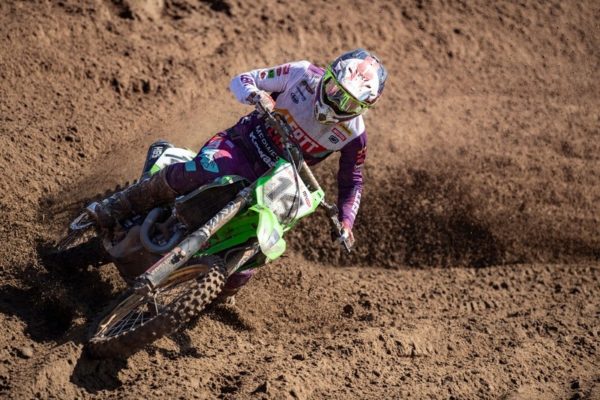 F&H Kawasaki Racing Team’s Jed Beaton was classified sixteenth overall to retain his seventeenth series ranking. A mistake on lap four of the first race cost the Australian ten seconds and five positions but he regrouped quickly to confirm that he is gradually regaining his fitness, posting solid lap times to the close to pull back tht lost ground and take the chequered flag seventeenth. He held a smooth eleventh place for six laps of race two until the track and climatic conditions started to take its toll and he eventually crossed the finishing-line fifteenth.